[Wilkes-Barre, PA, March 2018] The Lion Brewery Inc., one of Pennsylvania’s oldest breweries, is proud to announce the release of Lionshead IPA. This is the first new release to the brewery’s flagship brand, Lionshead, which sells over 750,000 cases annually, in over a century! 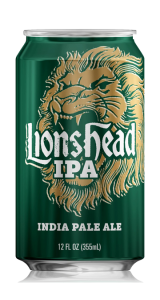 Lionshead IPA has been tested exclusively, on draft, in the New York City market at select on-premise accounts since the end of 2016. The overwhelming success of this market test has encouraged the brewery to aim for a release in all of their distributor partners, starting in March of 2018. This will include an outreach spanning 17 states. In addition of the draft offering, the Lion expanded its newest brand into a 12oz can 2-12 pack configuration.

“This is a fantastic opportunity to broaden the Lionshead portfolio. The Lionshead IPA will be offered as a year-round item, alongside Lionshead Pilsner and Lionshead Light. This is the first new offering of many to come,” said Ron Kinnear, Director of Sales at The Lion Brewery.

The Lionshead IPA is an American style India Pale Ale. The brewing process calls for the use of a quarter ton of hops, which balances the malt sweetness. There’s a bright citrus cascade hop aroma and ease of drinkability that will make you come back for more. This style is your everyday IPA!